Dong Qichang's Hometown "Looking Back": Mountain Residence and Other Authentic Works on Display in Songjiang

The Shanghai Songjiang painting and calligraphy context, which lasts for thousands of years, has produced many famous artists in the history of ancient Chinese painting and calligraphy. Among them, Dong Qichang is undoubtedly the most eye-catching one since the Ming and Qing dynasties. The proposal of "literati painting" and "the theory of northern and southern sects" on calligraphy and painting directly influenced the Chinese painting in the following 400 years.

The Paper learned that on September 15, "Reading Ten Thousand Books, Traveling Ten Thousand Miles - Dong Qichang's Landscape Painting Special Exhibition" was officially launched at the Shanghai Dong Qichang Painting and Calligraphy Art Museum. The exhibition features five groups of Dong Qichang's original works from the Shanghai Museum's collection, condensing Dong Qichang's artistic growth, including the rare "Dwelling in the Mountains", which is recognized as an early work, as well as paintings in the middle, late and mature stages of art. 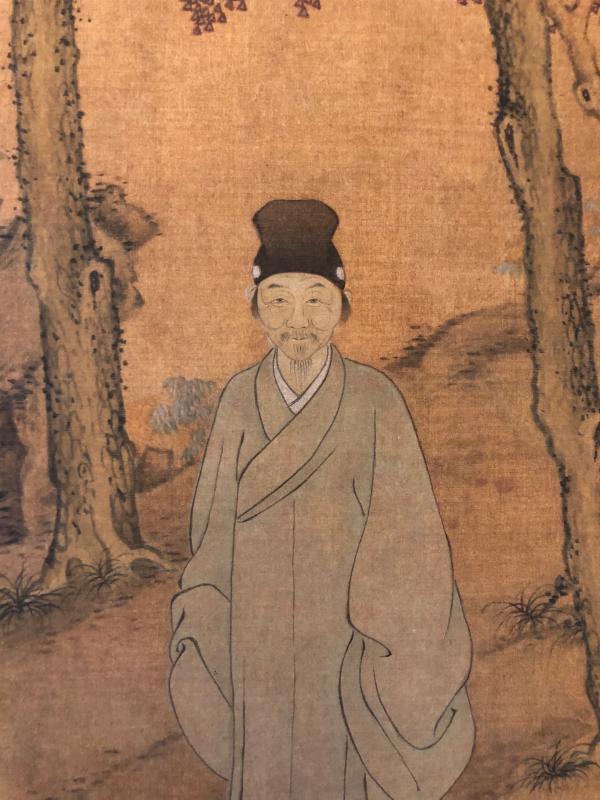 Statue of Dong Qichang (not in this exhibition) 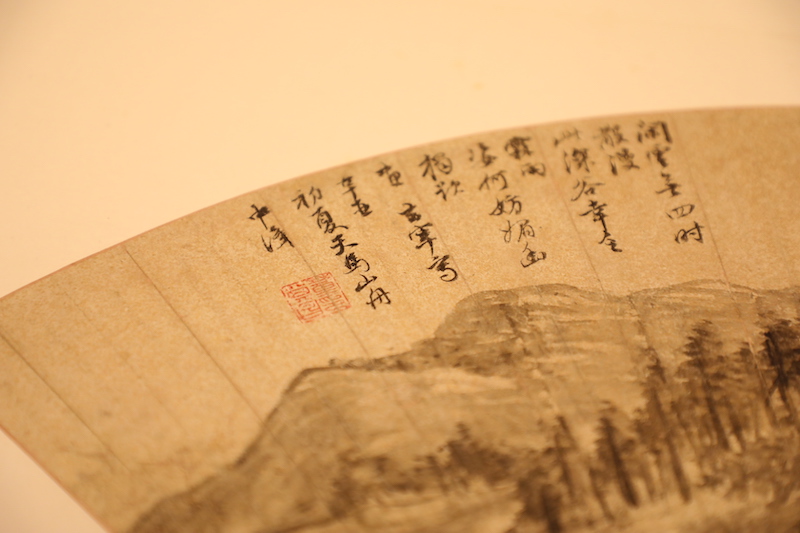 "One of the works is closely related to Songjiang, and that is "Deep Valley and Solitary Picture". This work was completed by Dong Qichang in Tianma Mountain, one of the nine peaks in Songjiang, and now he has returned to his homeland again." Peng, director of Dong Qichang's Calligraphy and Painting Art Museum Ye Feng said.

The content of this exhibition revolves around "reading ten thousand volumes of books and traveling ten thousand miles". The beginning of the "Origin of Painting" section, supplemented by a chronology based on literature research and summary, introduces when and where Dong Qichang first liked landscape painting, and outlines Dong Qichang's inheritance of painting and the foundation of his art. Through specific works, the audience is led to a glimpse of Dong Qichang's various important artistic periods, and the whole process of Dong Qichang's landscape painting art from beginning to maturity is described.

Dong Qichang (February 10, 1555-October 26, 1636), courtesy name Xuanzai, no. Minister, calligrapher and painter in the late Ming Dynasty. His landscape paintings were taught by Dong Yuan, Juran, Huang Gongwang, and Ni Zan. The brushwork is delicate and neutral, quiet and sparse; the ink is bright and clean, gentle and calm; the blue and green colors are simple and elegant. Essays", "Rongtai Collection" and so on. 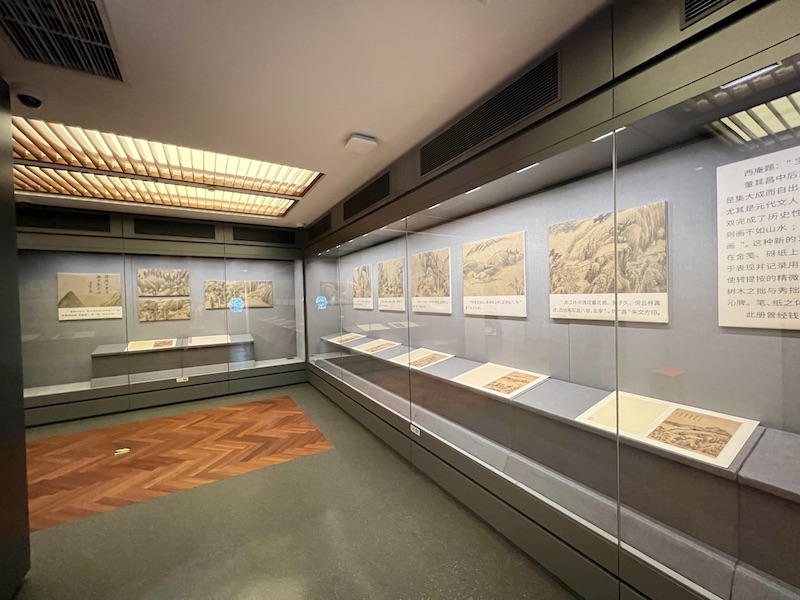 The three parts of "Heaven and Earth as teachers", "Take the heart to change" and "Take the ancients to change" combine historical textual research with works appreciation and painting theory, and comprehensively explain the connotation of "reading ten thousand volumes of books and traveling ten thousand miles" and how it works in Dong Qichang manifestation in art. The sections "Characteristics of Dong Qichang's Landscape Painting" and "North-South Sect Theory" expound the specific practical and theoretical achievements, introduce the practical and theoretical aspects of Dong Qichang's landscape painting to the audience in detail, and present Dong Qichang's artistic practice and art theory. Unparalleled achievement in this regard.

"This exhibition is titled 'Reading Ten Thousand Books and Traveling Ten Thousand Miles', to sort out Dong Qichang's landscape painting art from an academic perspective. There are 12 original works of Dong Qichang in 5 groups in the Shanghai Museum's collection, each of which is meticulously crafted by the Shanghai Museum. The selected ones condensed Dong Qichang's artistic growth process, which is not only meaningful but also has considerable academic value. There are rare paintings of "Mountain Residence" confirmed as his early works, as well as paintings in the middle and late stages of art and maturity." Peng Ye Feng said. 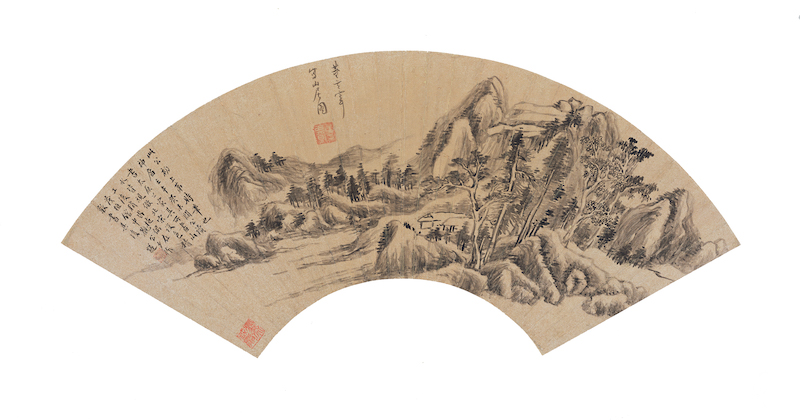 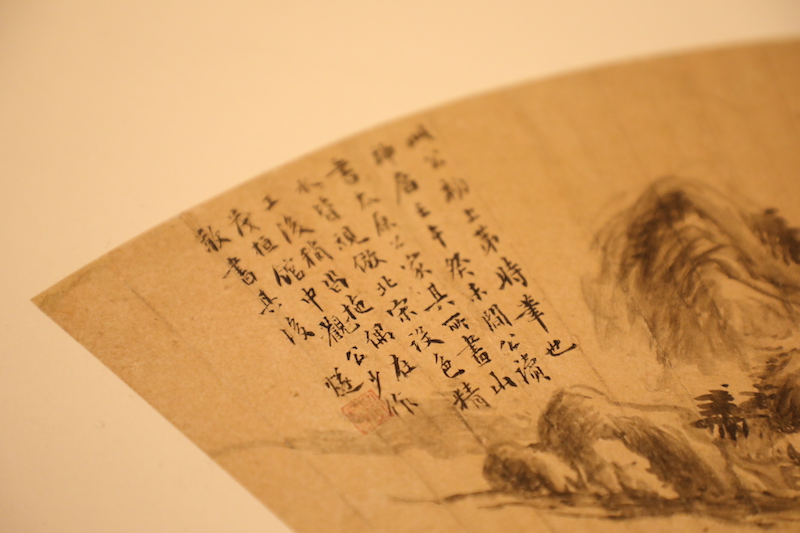 The reporter saw at the scene that among the five groups of authentic paintings and calligraphy of Dong Qichang in the Shanghai Museum collection, the layout of "Fan Pages of Mountain Dwellings" is relatively dense, the scenery is full, and the details are subtle. The chapped method is soft and the shape of the rocks is round, which is obviously derived from Huang Gongwang's painting method. According to the inscription titled "The first time this duke first started writing " by Cheng Jiasui (1565-1643), it can be seen that in the seventeenth year of Wanli's Wanli year, Dong Qichang was a jinshi (Jichou), so this fan leaf was created by Dong Qichang when he was thirty-five years old. Cheng Jiasui is good at painting landscapes and is one of the "nine friends in the painting". Judging from Cheng Jiasui's identification and the traces of immaturity in the painting itself, it is certain that it is Dong's early works. Therefore, this work can be regarded as one of the earliest paintings by Dong Qichang, which is of great significance for the study of his early painting style and is very precious. 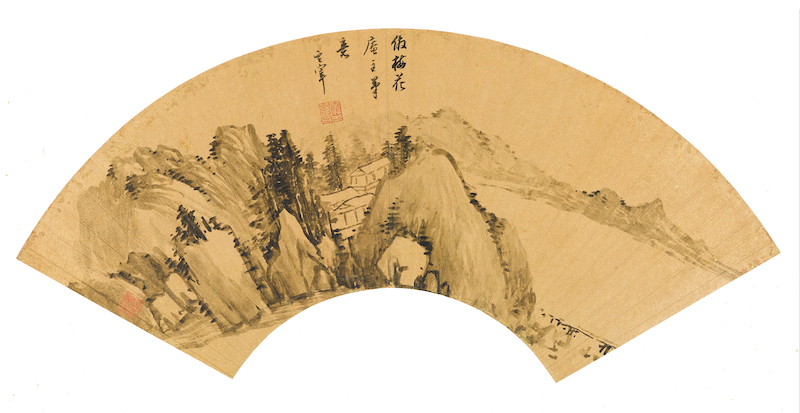 Dong Qichang, "Imitating the Plum Blossom Temple" in the collection of Shanghai Museum 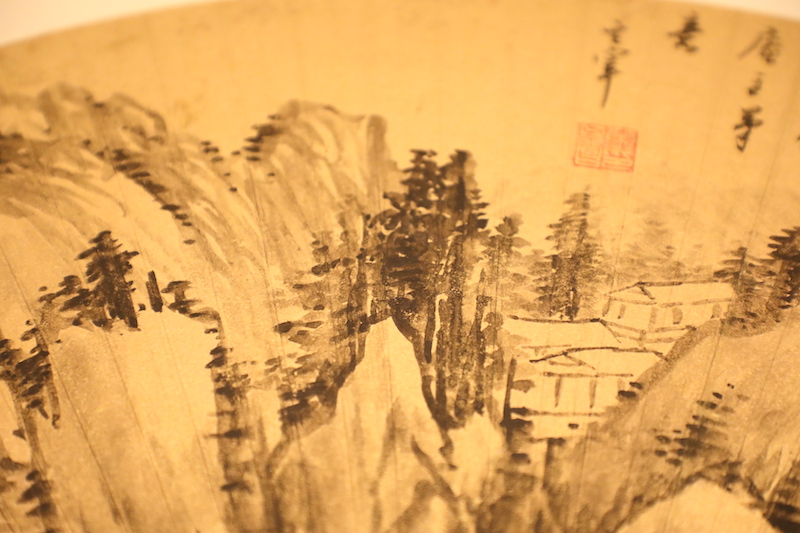 Dong Qichang, "Imitating the Plum Blossom Temple" (part of a fan page), in the collection of Shanghai Museum

"Imitating Meihua'an's main pen and fan page" is composed of tall trees, mountains and peaks, ancient temples and villages, and mountain pavilions and creek bridges. The brush and ink are unrestrained and vivid, and the weather is crystal clear and moist, which fully reflects the characteristics of Dong Qichang's use of ink, which is clear, clean, and gentle, gentle and soft. Dong Qichang once wrote an inscription: " Yu Yuyuan, the four great masters did not learn to be Wu Zhonggui, and Zhonggui learned from Juran, so there was someone who looked like the owner of the Plum Blossom Nunnery at that time. This picture is already. There are good things. " It can be seen that Dong Qichang's paintings imitate the works of the four Wuzhen styles of the Yuan Dynasty, which are even more commendable. 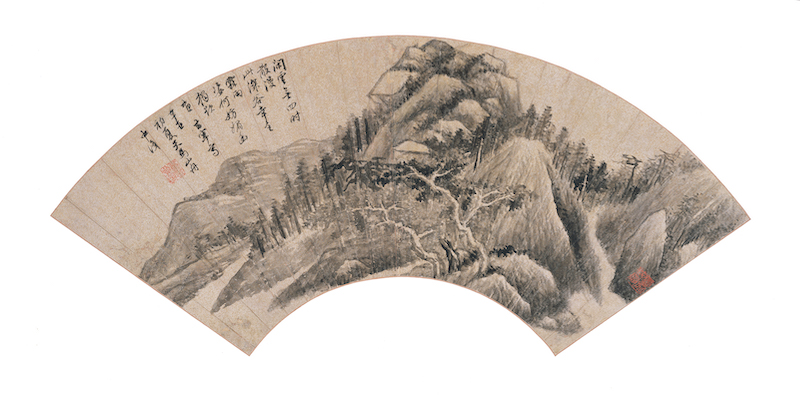 "Deep Valley, You Dutu Fan Page" is a close-up view of the bank of miscellaneous trees, the mountain trail is moved back, and the distant mountains are emptied. The painting method is more integrated into Juran’s intentions, with long drape and hemp, solemn ink, and Huang Gongwang’s round rock shape, which is filled with a plain and innocent rhyme, which is a portrayal of Dong Qichang’s mood of wandering in the mountains and forests when he was idle in the south of the Yangtze River. . It also reflects Dong's artistic exploration process in the early and middle stages of applying the Yuan method to the Song method. 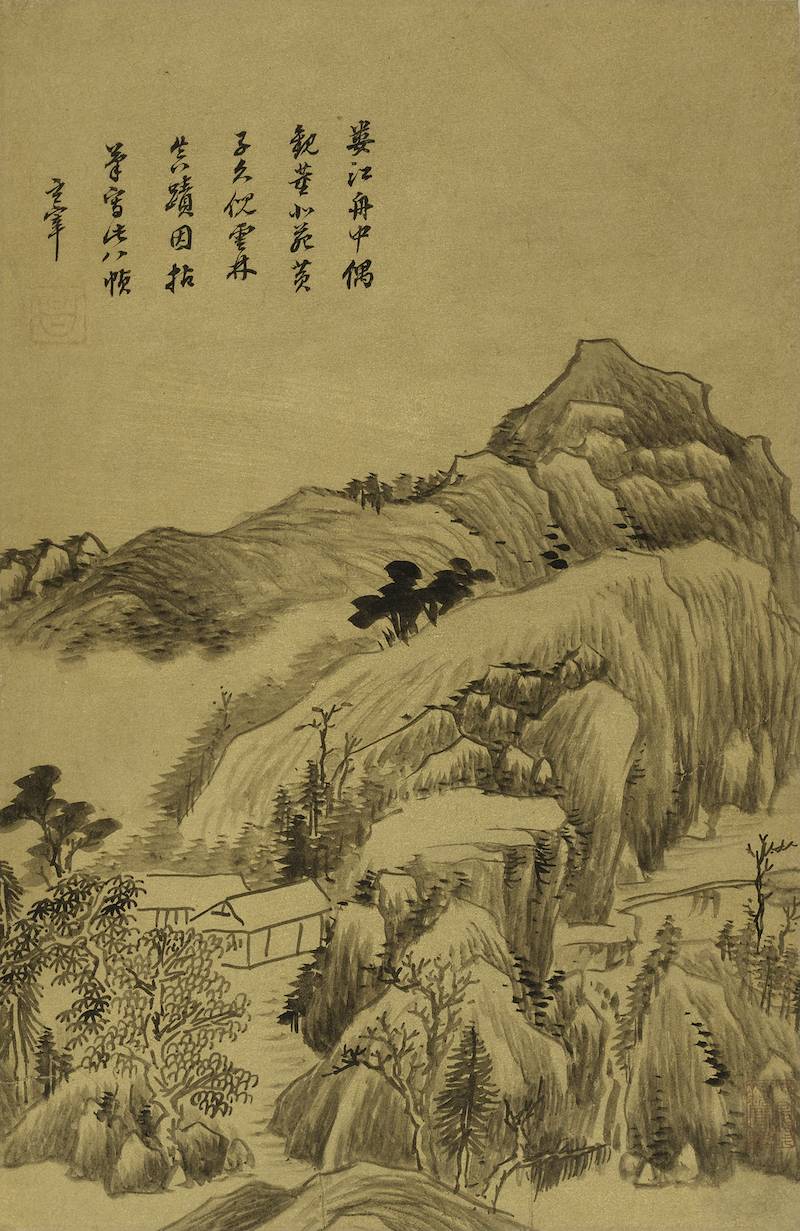 The realm of Dong Qichang's painting art in the middle and late period can be said to be a collection of masterpieces and a self-made machine. After fully inheriting the essence of ancient literati paintings, especially the Yuan Dynasty literati paintings, it has achieved historical transcendence in both theory and practice. "With the strangeness of the path, the painting is not as good as the landscape; with the subtlety of the brush and ink, the landscape is never as picturesque." This new artistic pursuit also makes Dong especially like to paint on gold paper and cut paper. This kind of paper, which is not easy to seep into ink, is easy to express and record the priorities, shades, dryness and wetness in the process of using the pen. Variety. The "Antique Landscape Album" exhibited this time was once collected by Qian Jingtang. The thoughtfulness of pen and paper can be said to be in every detail. 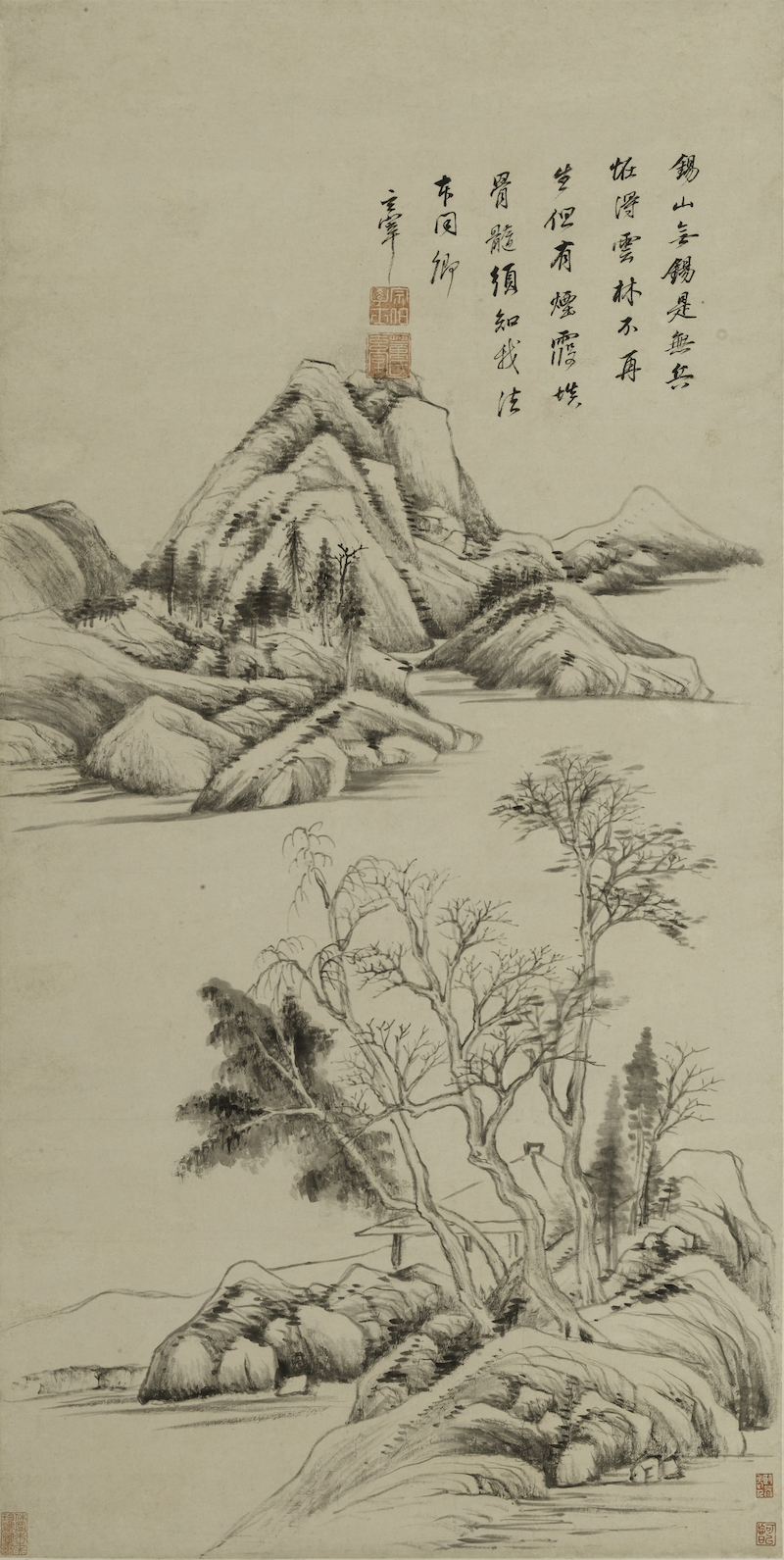 The axis of "Xishan Haze" is composed of Ni Zan's three-stage composition, with a close-up view of miscellaneous trees and rocky slopes, and a short pavilion is hidden and no one is seen. The middle scene is calm and calm, without a trace of ripples. The distant mountains and rivers meander, the mountains and valleys are ups and downs, and the winding paths lead to seclusion. Like a paradise, it is yearning. In the painting method, Ni's folded belt is the main one, and the brushwork is loose and graceful, and the blending of Huang Gongwang's ink method is used, so it is clean but not dry, clear and not dull, and it is a good composition for Dong Qichang after the age of 70. . 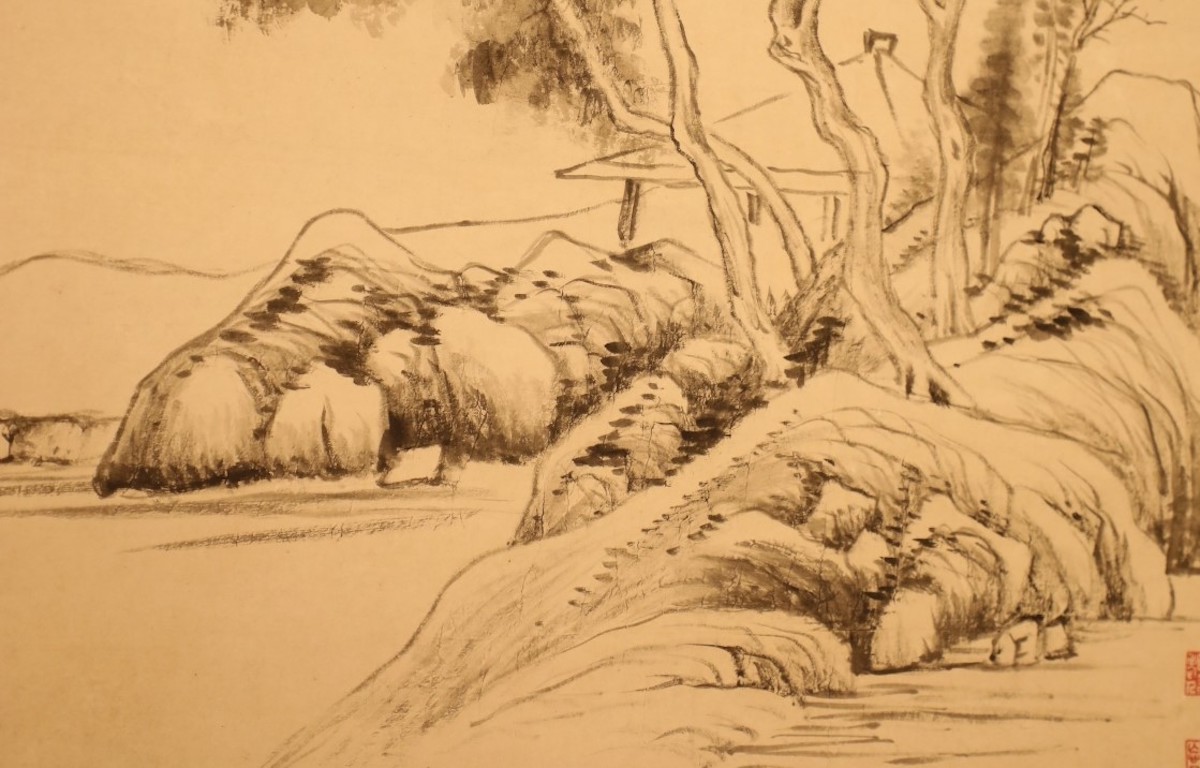 In the exhibition design, the organizer also specially set up the "Shanshui Science Popularization Wall" to take the audience to see the changes of landscape paintings in the past dynasties.

"Landscape painting, as one of the most important parts of Chinese painting art, has been involved in the process of Chinese art growing from nothing and gradually evolving since its birth." Jia Jiahui, the calligraphy and painting research department of Dong Qichang Museum of Calligraphy and Painting, told reporters during the on-site tour. "As dynasties change, the art of calligraphy and painting also rotates. We can't know when each turning point in art history appears, in what form, and what changes will it bring, but Dong Qichang has no doubt in practice and theory. An unprecedented new breakthrough has been created on the dual scale, and it has become a milestone in the history of art and a benchmark for Chinese painting and calligraphy art. Without Dong Qichang, the history of Chinese art is incomplete." 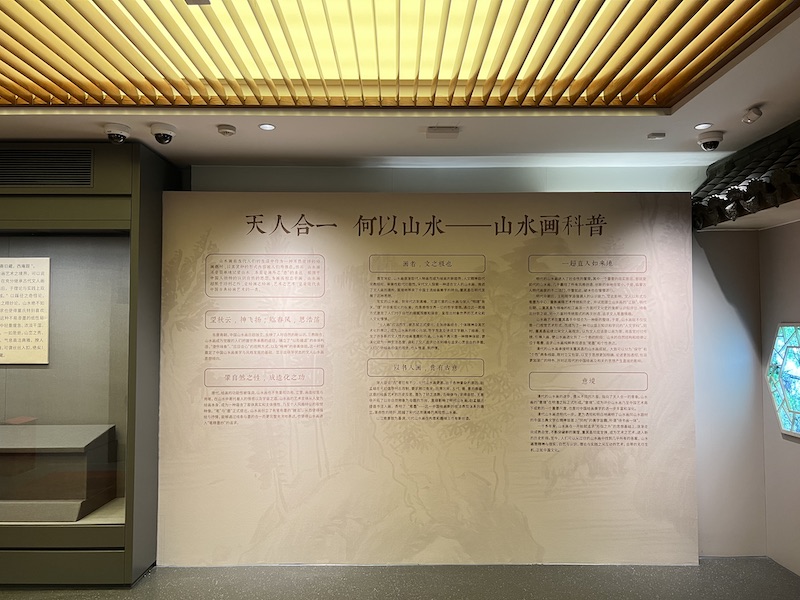 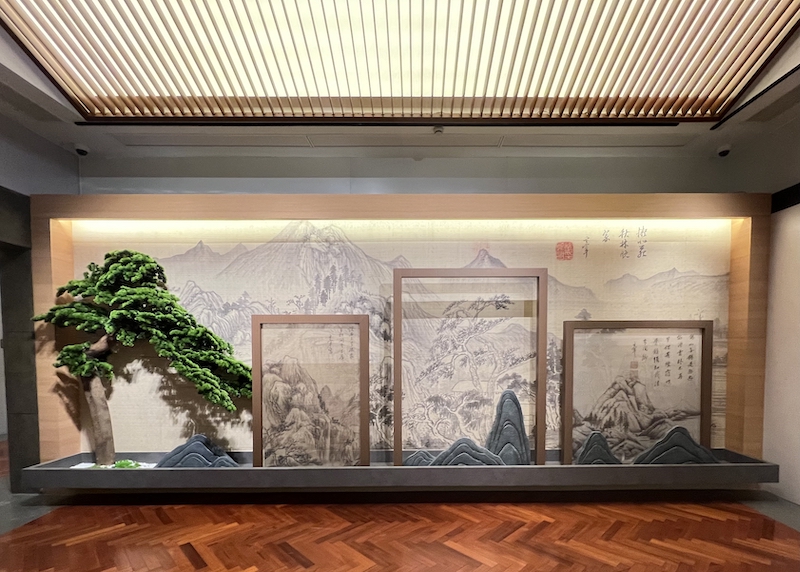 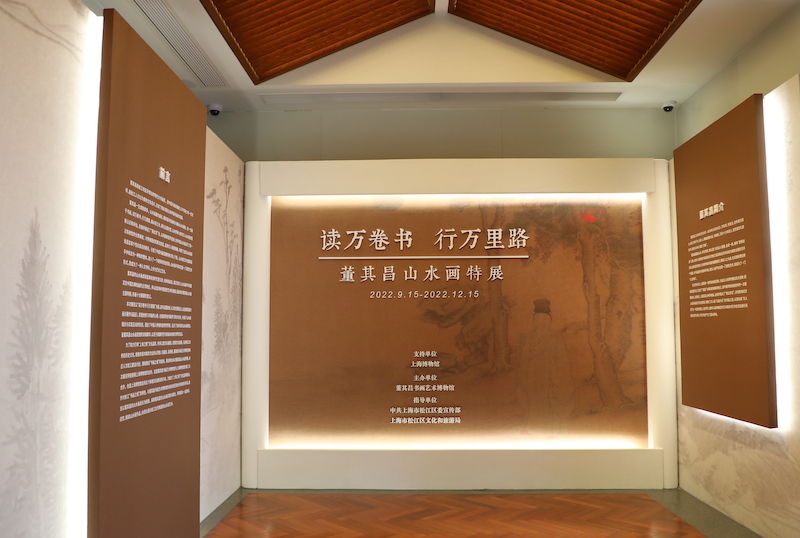 "With the support of the Shanghai Museum, we invited Dong Qichang's themed exhibition to bring the authentic works home, which has a very positive effect on the academic research and exhibition in the museum, and also provides a good opportunity for the citizens of Songjiang to appreciate the authentic works. Very Thanks to the Shanghai Municipal Party Committee and the Municipal Government for their strong support for the cultural construction of the five new cities, and thanks to the Shanghai Museum for its active implementation and support in providing us with calligraphy, painting and cultural relics.” Peng Yefeng finally said, “In the future, we will continue to launch themed special exhibitions. , around the goal of building a 'calligraphy and painting city', strengthen cooperation with Shanghai Museum, expand and other cooperation channels, strengthen its own academic research, and better carry out the research work of Yunjian Calligraphy School and Songjiang School of Painting."