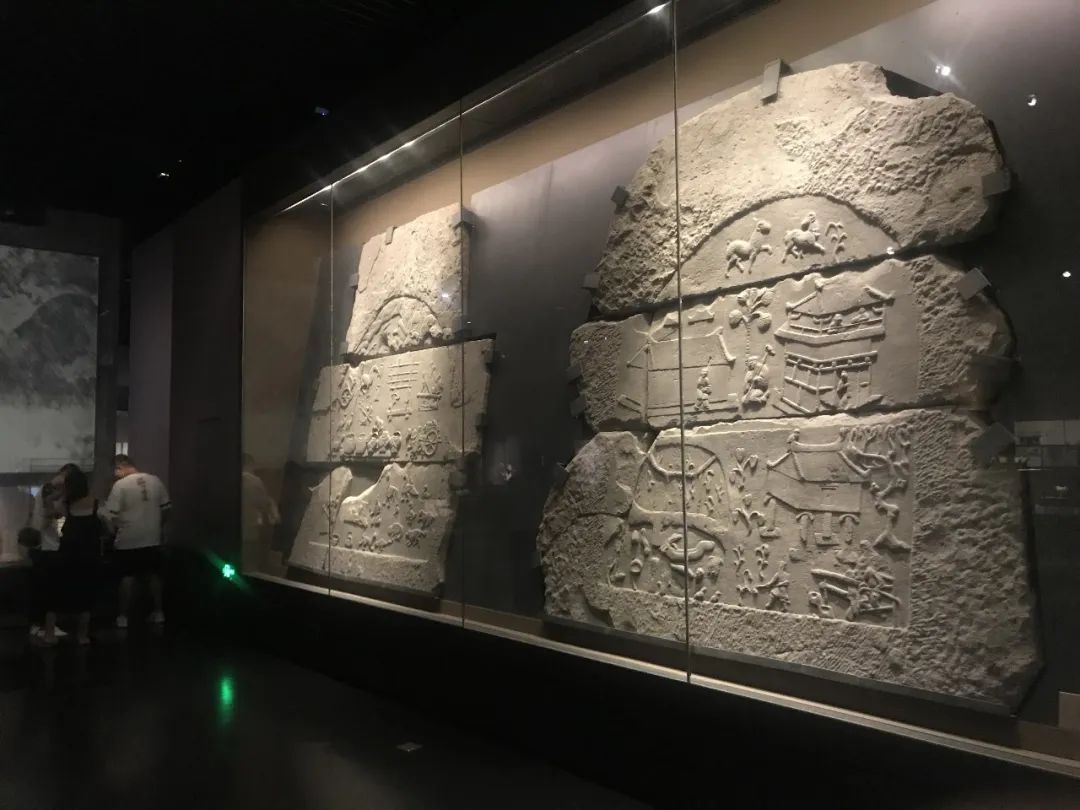 Here, we can see the richness and stability of the fertile plains of the Chengdu Plain and the prosperity of all industries. The portrait stone is divided into three layers. The upper layer is for hunting deer in the mountains, and one person is bending a bow to shoot deer; the middle layer is full of weapons, and there is a woman on each side operating a loom. Above the loom are horses, monkeys, columns, food troughs, and double carriages; the lower layer is complete wine making. During the process, you can see the process of drawing water, transporting grain, cooking, and fermenting. There are poultry and livestock such as pigs, dogs, chickens and geese in the surrounding area. 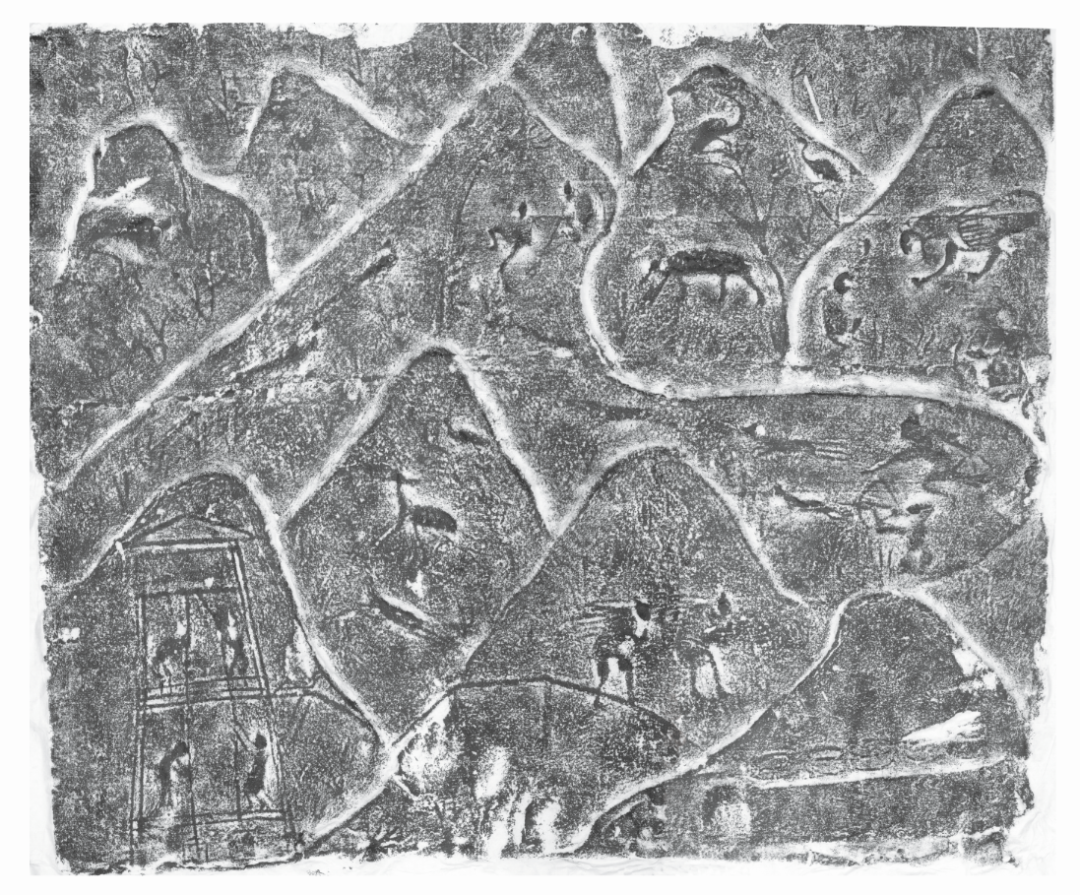 The mountains stand on the portrait stone, the vegetation is lush, and there are birds and mammals in the mountains. In the lower left corner of the salt well, there is an elevated shelf, which is divided into two layers. On each layer, two people are using pulleys and buckets to draw brine; in the lower right corner is a long stove with five kettles, and one person is burning the fire to boil the salt; the derrick and the shelf between the stoves There is a steamer, and the brine passes through the steamer to the cauldron on the stove; at the foot of the mountain, there are two salt carriers carrying salt bags. The image of the portrait stone reproduces the natural ecology of Shu in the Eastern Han Dynasty and the busy scene of well salt production, which proves that Chengdu is an important salt producing area in the southwest.
Here, we can see three-dimensional agriculture with parallel farming and planting in ponds. 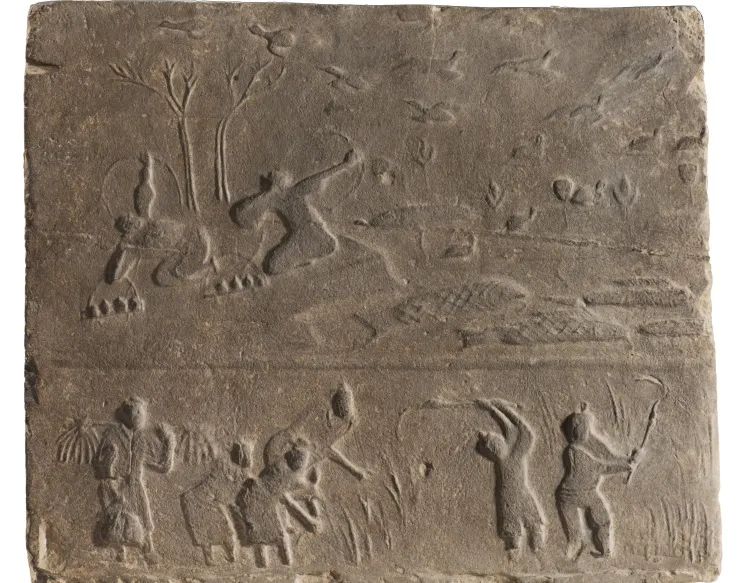 The portrait stone is divided into upper and lower layers. There are a group of ducks and big fish in the upper lotus pond, the lotus buds are waiting to be released, and the lotus leaves are rippling on the water. In the sky, a group of geese are flying, and under the shade of the trees, two people are bowing their bows and shooting at the wild geese in the sky; in the lower rice field, many people are working hard to harvest the ears of grain, leaving a piece of harvested land behind them, and the people carrying the food boxes have finished their meals. , was about to go home. 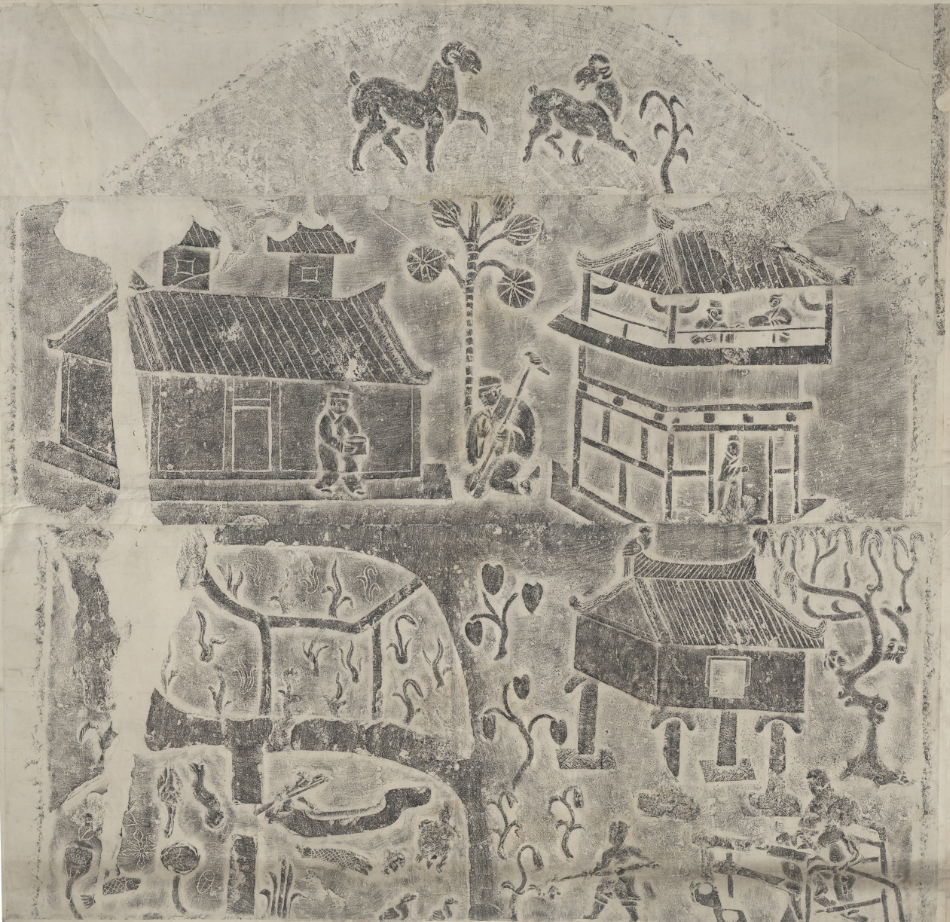 The top of the stone is a pair of sheep pacing for food; there is a house in the middle, and one person walks out of the door with a food box and walks to the old man who is sitting under the tree and holding a dove stick; two people are sitting idle in the high-rise building on the right, and they seem to be in the same direction. Big talk. Below the picture are paddy fields and ponds, where seedlings are planted, fish and various aquatic crops are raised. In the lower right corner, there are still farmers working hard, and the granary is filling the granary with a bumper harvest.
Here, we can see the pattern of "city" in "Erjiang Erqi City" with proper planning. 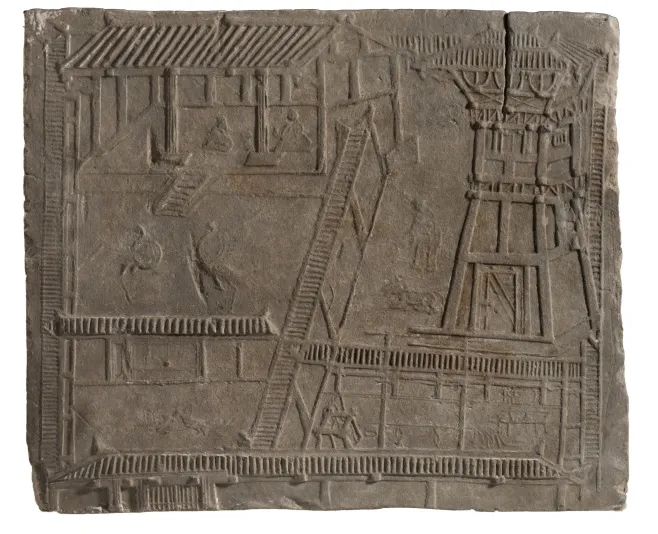 The portrait stone is a top view of a quadruple courtyard, surrounded by a corridor, and the courtyard is divided into two parts by the corridor. In the front yard, there are roosters fighting each other; in the inner yard, two cranes stand facing each other; The main room can be clearly seen as a single cliff and hanging mountain-style building with three rooms in width, and the tall building is a watchtower, which has the function of military defense. The house on this brick is the epitome of the residence of the rich and officials of the Han Dynasty. 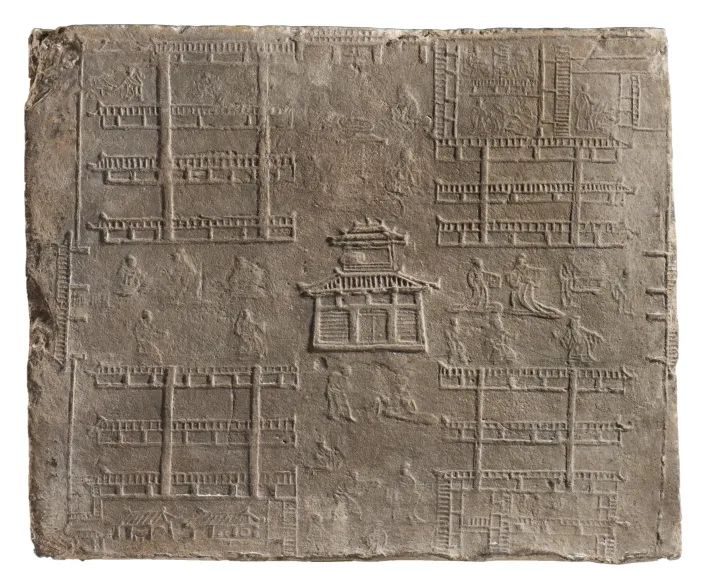 Bricks in a shop in the Eastern Han Dynasty Chengdu Museum

The portrait bricks are looking down. There are three rows of five-ridged houses on the top, bottom, left, and right sides of the cross-shaped market, which should be columns. There are people sitting or standing in the houses. There is a double-eave two-story city building in the middle of the whole picture. All kinds of people on the street walk, push carts, and trade. There are walls around, one on the left and one on the left, the city wall and the city gate. This is the true portrayal of the "city" set up by Li Bing, the prefect of Shu County. Li Bing moved the "city" originally located in Chengdu to the "two rivers" outside the city, and built the largest "city" in the southwest region at that time. The established unified and standardized market was managed by special personnel. Closed. "Erqi City on Erjiang River" reflects the positional relationship between Chengdu city and commodity market and river at that time. Such an urban pattern has lasted in Chengdu for about 600 years.
Here, we can see the romantic mood of singing and dancing feasting. 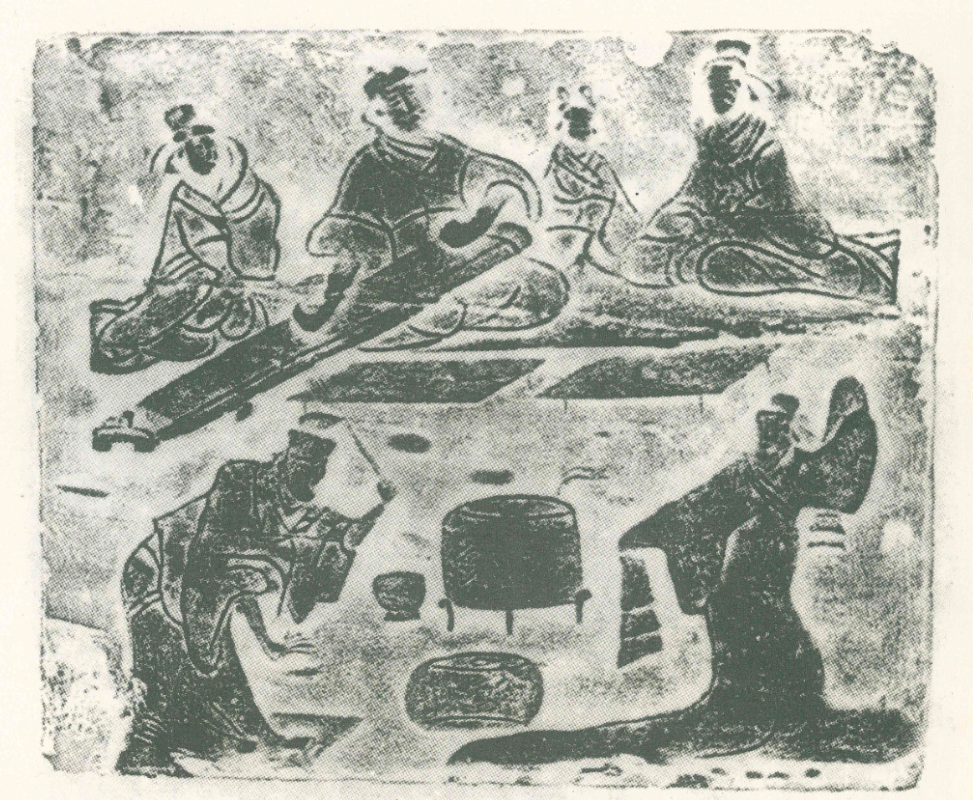 There are six people in the portrait stone, sitting or standing around bottles, cups, tables and other feasting vessels. The four people above are facing each other on the ground. The man on the right wears a high crown and a long dress, and is a dancer. The three on the left are in wide-sleeved long clothes. The man in the middle is drumming with both hands, or "Le Zheng". The rest are either singers or dancers. The composition of the whole picture is reasonable and lifelike. The dancers are dancing, the musicians are drumming, and the singers are singing. 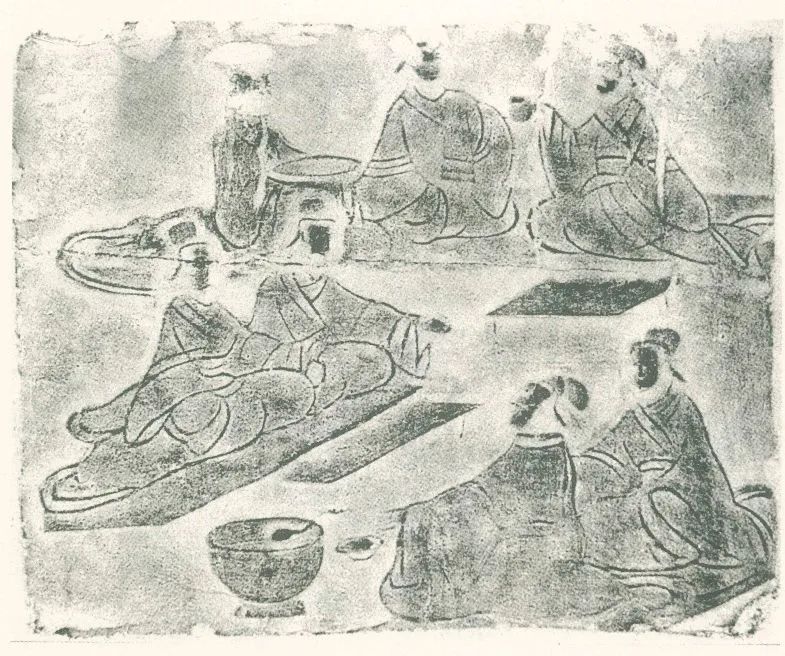 The composition of the banquet scene is clear and reasonable, with a total of seven people sitting around the table. All seven people wore crowns and caps and dressed in broad clothes. Some people held plates and toasted their glasses and offered food to those in the middle.
Here, we can see a variety of dramas and colorful time series scenery. 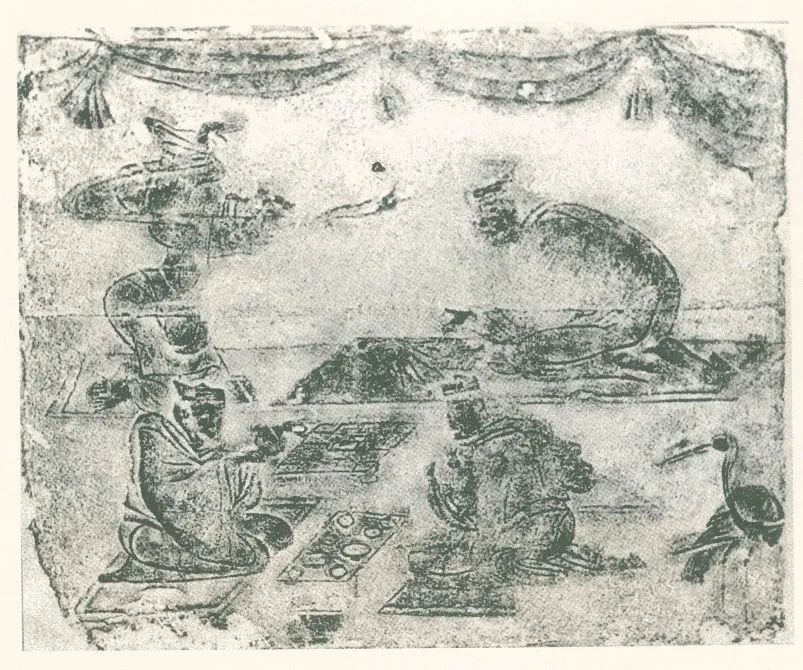 There are four people on the portrait stone, divided into two groups, one for games and one for feasting. The gamblers are throwing chopsticks, and their expressions are tense. The feasters are drinking in pairs. Dishes and ear cups are placed on the table, and their posture is relaxed. There is also a crane standing on the lower right. 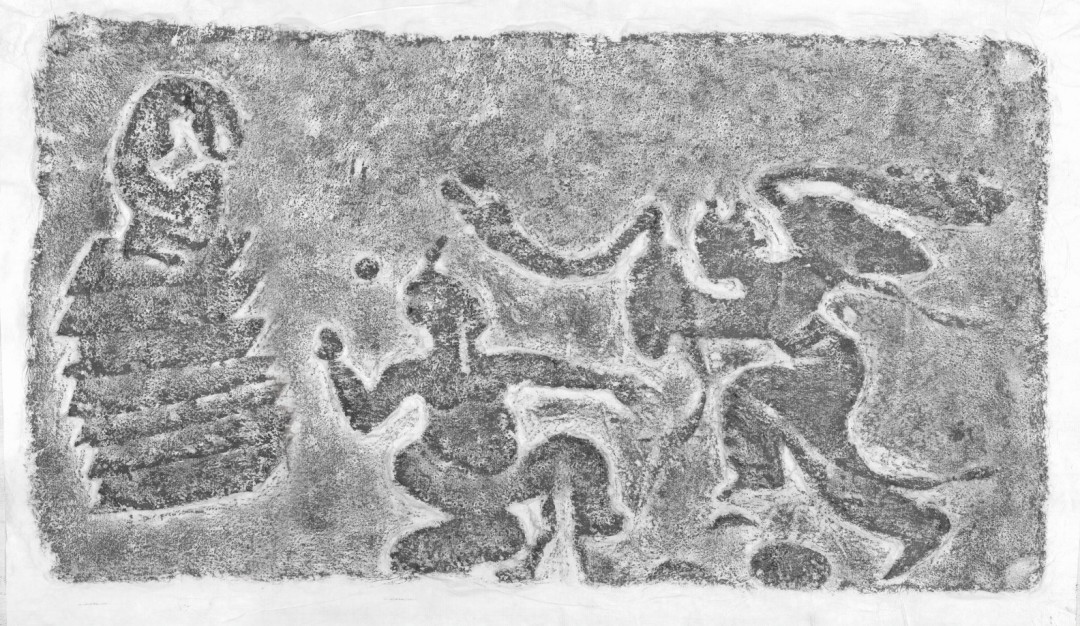 There are three people on the portrait bricks, performing acrobatics, ball dancing, and pan dance respectively. The woman on the left has her hair combed and double-headed, and is performing "reverse bow". She is standing upside down on the stacked desks, her legs are complete, her body is turned down, and she is showing superb skills. The dancer on the right goes down to the drum and plate and jumps on it. "Pan drums" were popular in the Han Dynasty. Zhang Heng's "Xijing Fu" in the Eastern Han Dynasty once described "Zhen Zhu's shoes on the pan, and the long sleeves of the scorpion". Here, the peerless demeanor of the dancers walking on the pan is reproduced. .
Here, we can see the beautiful yearning for Kunlun Wonderland and I want to ascend to immortality. 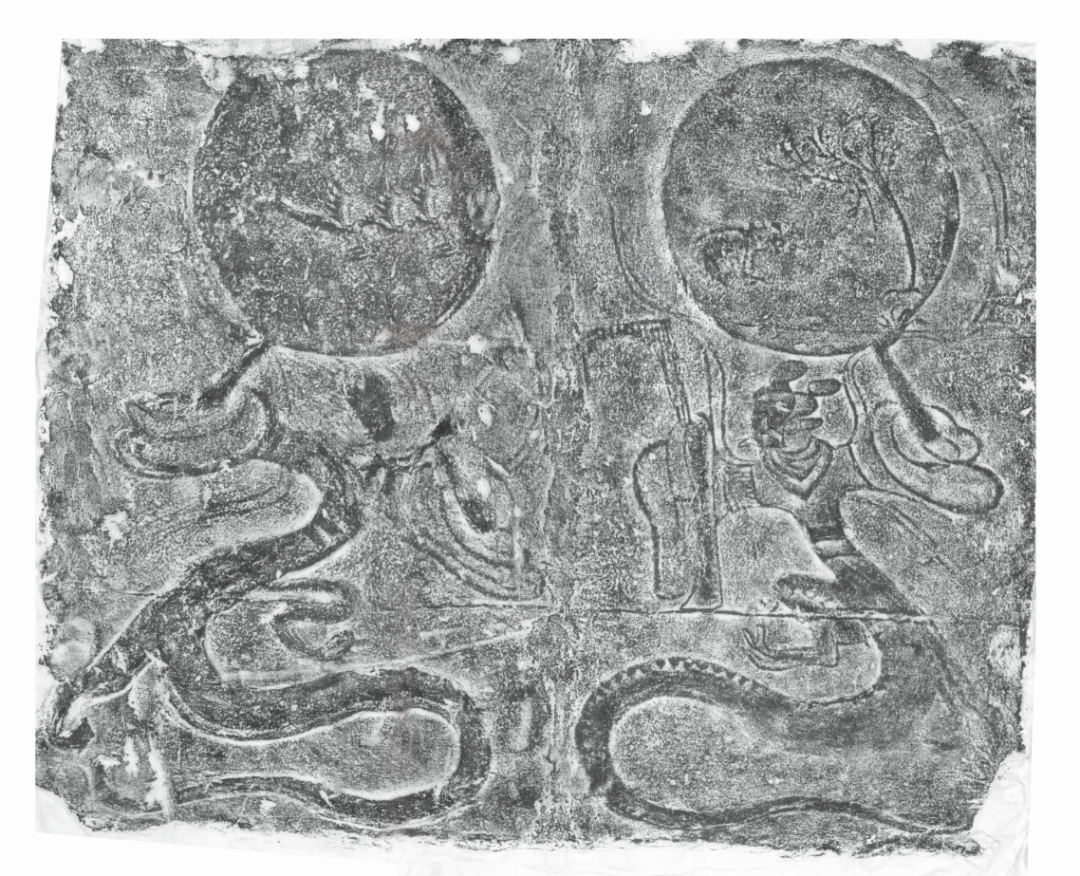 The portrait bricks are of Fuxi on the left and Nuwa on the right, both of them wearing clothes and belts, with the heads of snake gods. Fuxi wears a crown on his head, holds a yardstick in his left hand, and holds the sun in his right hand, and there is a golden crow in the sun; Nuwa has a pair of temples on his head, his left hand holds a square, and his right hand holds the moon, and there are guizi toads in the moon. The worship of the legendary ancient emperors and ancestor gods reflects the general desire of people in the Han Dynasty to grow into immortals. 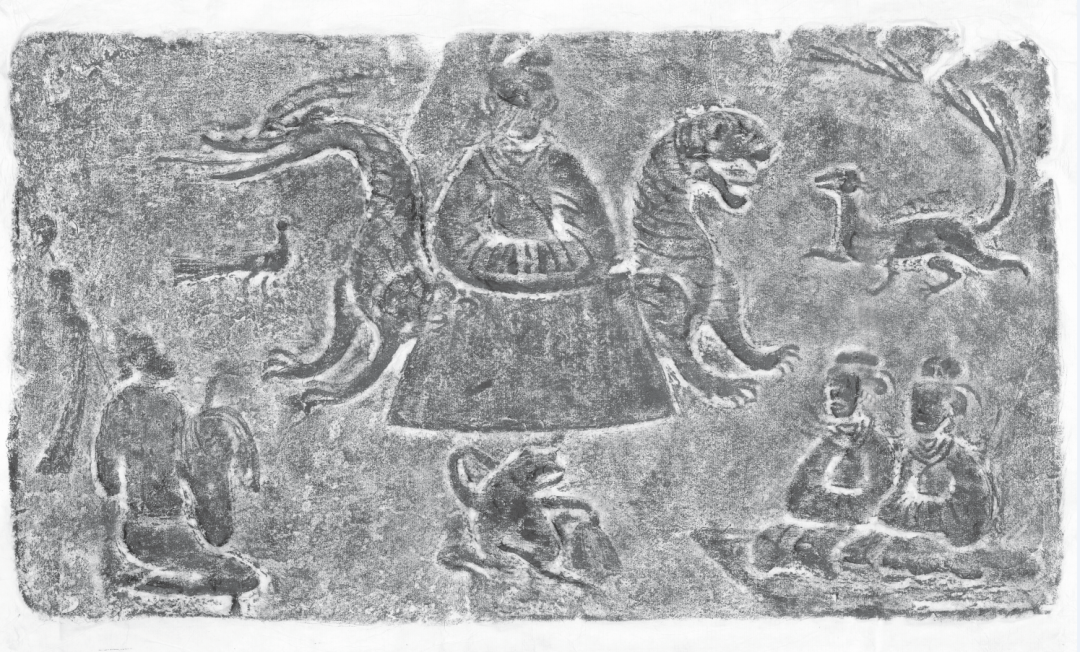 Bricks of the Queen Mother of the West, Eastern Han Dynasty, Chengdu Museum

On the portrait brick, the Queen Mother of the West sits on the dragon and tiger seat, with a three-legged black crow on the right, a nine-tailed fox on the left, a toad standing and dancing in the middle in front, a Taoist person on the right kneeling and two people sitting on the left. In the Han Dynasty, people believed that the Queen Mother of the West was in charge of the elixir of immortality and was one of the most revered gods in the fairyland. The image of the Queen Mother of the West was drawn in the tomb to let the deceased reach the immortal world of immortality.
Highly condensed brushstrokes, simple and clear lines, full of vitality and unsophisticated wildness, the portrait stone is not only a true record of the customs of the Han Dynasty, but also a very distinctive work of art.
(This article was originally published in "Wonderful Museum" <Chengbo Special Issue> jointly published by Chengdu Museum and Xinlei Publishing House, and published by The Paper with authorization)